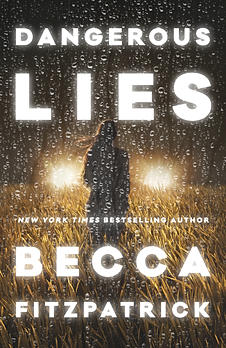 I have been a fan of author Becca Fitzpatrick since the first installment of Hush, Hush was published in 2011 so you can imagine my excitement when I discovered she has ANOTHER novel coming out next month!

Dangerous Lies will be published on 10th November 2015! Here is a brief description from Goodreads to give you an idea of what to expect…

A teen is forced to make a fresh start after witnessing a violent crime—but love and danger find her anyway in this novel from Becca Fitzpatrick, theNew York Times bestselling author of the Hush, Hush saga.

After witnessing a lethal crime, Stella Gordon is sent to the middle of nowhere for her own safety before she testifies against the man she saw kill her mother’s drug dealer.

But Stella was about to start her senior year with the boyfriend she loves. How can she be pulled away from the only life she knows and expected to start a new one in Nebraska? Stella chafes at her protection and is rude to everyone she meets. She’s not planning on staying long, so why be friendly? Then she meets Chet Falconer and it becomes harder to keep her guard up, even as her guilt about having to lie to him grows.

As Stella starts to feel safer, the real threat to her life increases—because her enemies are actually closer than she thinks…

After thoroughly enjoying Black Ice, I cannot wait to give this book a read!

From photography and baking to the books I’ve been reading or shows that have been taking over my life - I love to share all of my adventures, big or small and take any opportunity to celebrate even the little things that make me smile. Be sure to say hello in the comments!